In order to understand a wine and the people that make it, one should visit the vineyards and wineries of a wine region

We recently went on an interesting tour, organised by Johan de Smedt of Valencia Wine Consulting & Tours, to the wine region of Utiel-Requena, situated at around 60 kilometres from Valencia, into the interior. It’s a small plateau of some 1800 km2 at an altitude of 600-900 meters – it’s dry, with short hot summers and very cold winters.

Growing grapes is the main economic activity of the Utiel-Requena wine region, and has been important for a very long time. Western Europe’s oldest winery was discovered here in excavations in Las Pilillas, not far from Requena, showing that more than 2700 years ago wine was already produced in this region.

The main grape here is the red Bobal; in the past more than 90% of cultivated grapes were Bobal. Nowadays this is probably only around 75%, as white grapes are on the increase – this is mainly for the production of Cava, Spanish sparkling wine, which is produced in Requena.

We were a group of 18 people, so we hired a bus of Autocares Alegre  to take us there and back; much more comfortable, and at least we didn’t have to argue about who would drive and not drink… 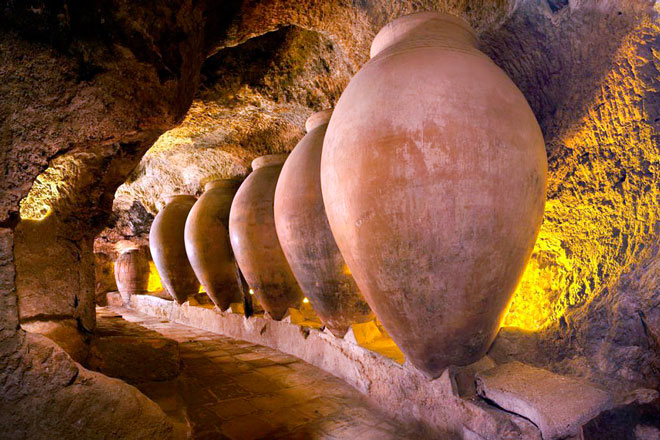 Our first stop was in Requena, where we walked up into the picturesque historic centre of the village, and then down some steep stairs into a 13th century cave, which was used, during many centuries, to make and store wine. The evidence is still there, in the shape of many large amphorae. Nowadays the cave is only used for wine tastings, which is exactly what we did… We tried a young rosé and an oak-aged red wine, both made with the Bobal grape, with some delicious local snacks to accompany the wine.

We climbed back out of the cave, some of us less steady on their feet, and got on the bus to go to Utiel, to the Vera de Estenas winery. This beautiful old winery of the 1880s lies in the middle of nowhere, and has a spectacular view of the vineyards surrounding the winery. During the guided tour we followed the whole process of wine making: we started in the vineyard, where we learned about the grape varieties they use, and the challenges of getting good quality grapes. We then went from vineyard to fermentation tank, to wine press and eventually to the barrel room, where the wine rests for many months in barrels made of French oak. 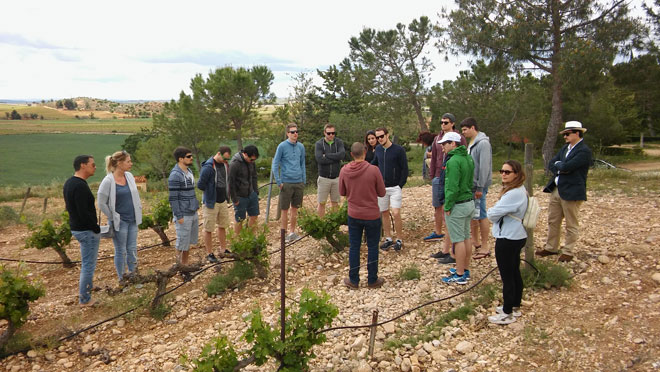 As happens at wine tours, we ended the winery visit with a wine tasting

We first got a very nice reserve Cava, with fine bubbles and delicious aromas. The next wine was quite an unusual one, for two reasons. Firstly, it’s made with the Malbec grape, a grape hard to find in Spain; secondly, it’s a blend of wines of different years, in this case of 2014 with 14 months of barrel ageing, and of 2015, with only two months of barrel ageing. The Casa Don Angel Malbec was surprisingly fruity and light. And very nice – a favourite of many. 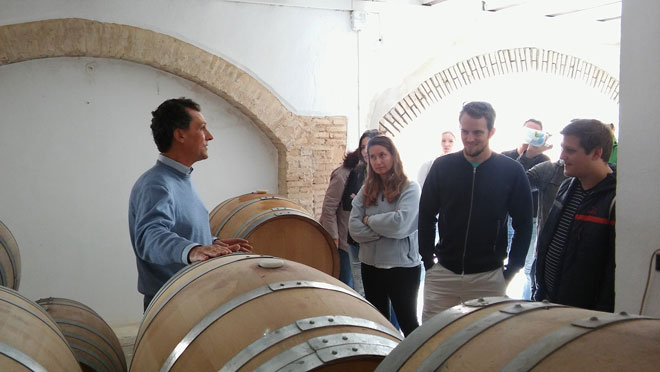 The third wine we tried is the top wine of the winery, named after the house and founder of the winery: Casa Don Angel Bobal; a robust, full-bodied Bobal, which will continue to improve in the bottle for many years.

At around 2 pm we left the winery to go for lunch at a local restaurant, El Vegano, in the village of Utiel, where we enjoyed the local gastronomy with some typical regional dishes, and of course some more local wine.

It was a great day out; time flew by! By 5:30 pm we were back in Valencia; and already looking forward to the next wine tour.

From the highest range of the DOP Pago Los Balagueses to the young red wine Rebel·lia, going through Caprasia Bobal – both of them from the DOP Utiel Requena – the wines from Bodegas Vegalfaro scored from 90 to 93 points. This ranked them as “Excellent” by the Peñín Wine Guide, which has just been published in digital edition… (Do not continue reading under any circumstances…)

Vilarnau, the Emotion Behind the Bubbles of a Cava Brut Reserva